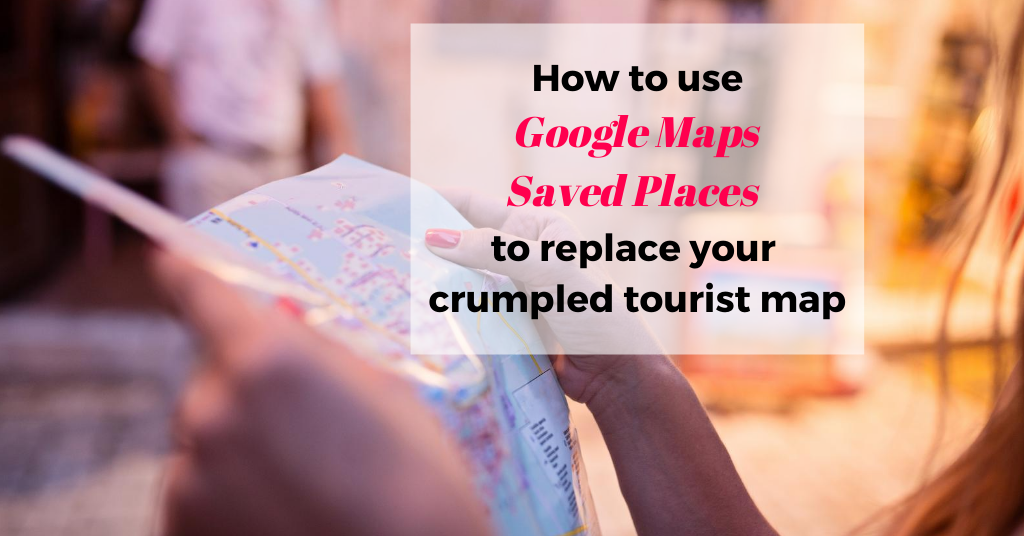 SojournTravel.com is part of the Amazon Associates affiliate program, as well as affiliate programs from other companies. That means if you purchase a product through links on this website, we earn a commission, at no additional cost to you.

What Is Google Maps Saved Places?

Not sure exactly what the “Saved Places” feature of Google Maps is?  It’s essentially a list-making area.  You can make lists of things that you found and wanted to keep track of on Google Maps.

Why Use Google Maps Saved Places When Traveling?

Why use this feature when you’re off on a trip somewhere?  Oh, let me count the ways…

First, you’re probably already using Google Maps for some things.  So why not harnass the full power of the app.

Who the Heck Can Remember?

When you’re traveling, (or even when you’re not LOL), if you see things throughout the day that you may want to revisit at a later time (restaurants, museums, etc.) who the heck can remember all this stuff?  The reality is…you won’t.  So you’ll miss out on whatever it was.

Use On Any Device

You can use Google Maps and Saved Places on any of your devices.

No Need For Internet

You can even use it offline if you need to.  Perfect for those full-day jaunts out and about while you’re on vacation.

Those Paper Maps – Ever Lose Them?

Yep, be honest now.  How many trips to the front desk or concierge have you made in any given place to get another city map?  And hopefully you didn’t write all your important vacation notes on the one that you lost!

First, just go to your device and launch the Google Maps App. 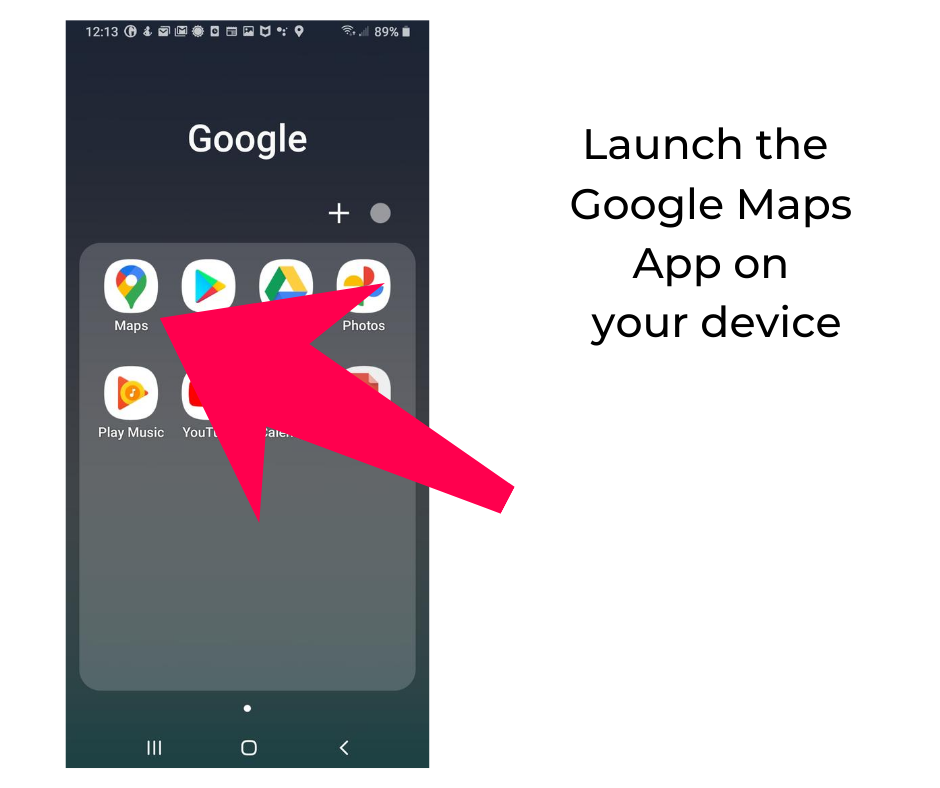 When Google Maps launches,  you’ll most likely be one the Explore tab which means the map will have opened up.  Tap the Saved icon at the bottom. 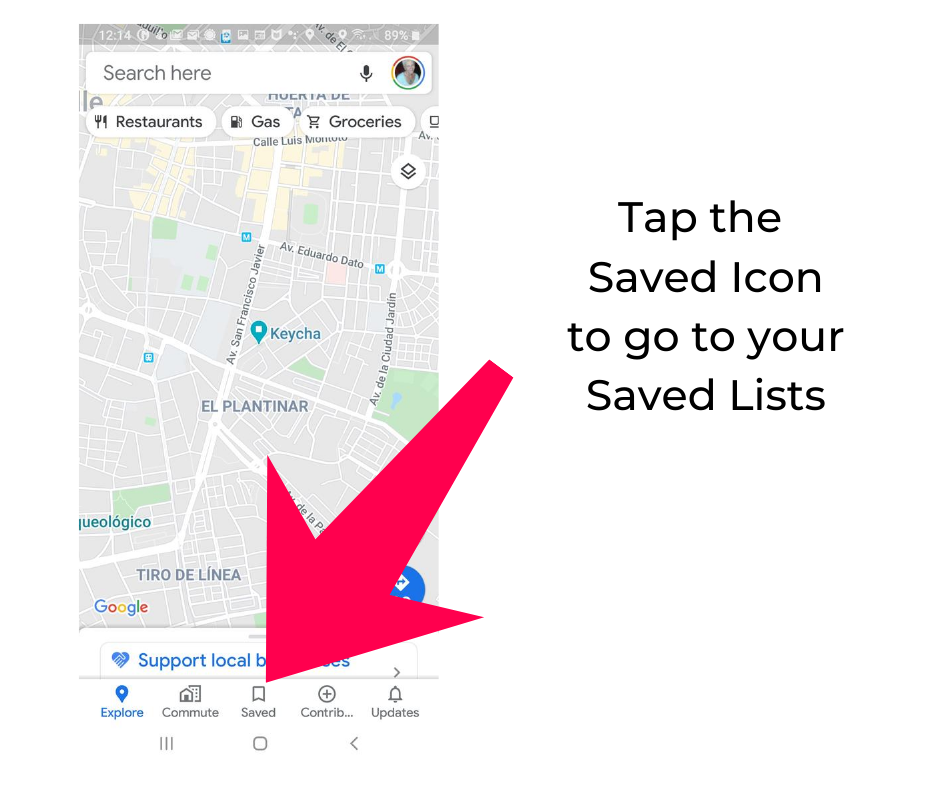 If you haven’t used Google Maps Saved Places before, you most likely won’t have any lists there other than 3 default lists that are automatic.  They are Favorites, Want To Go and Starred Places. 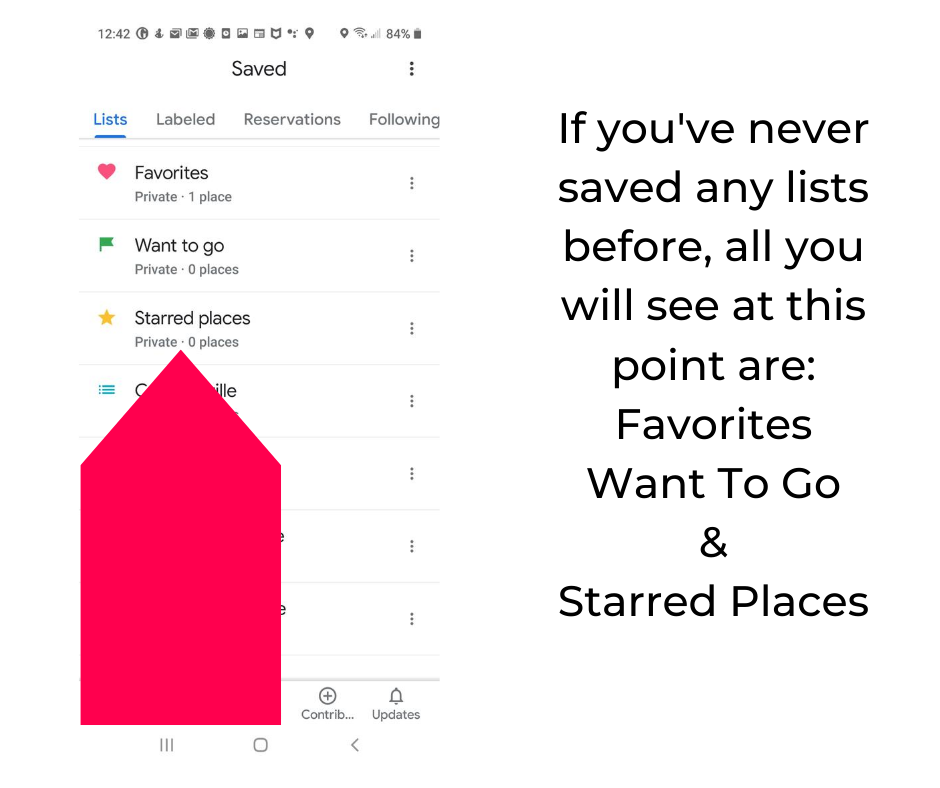 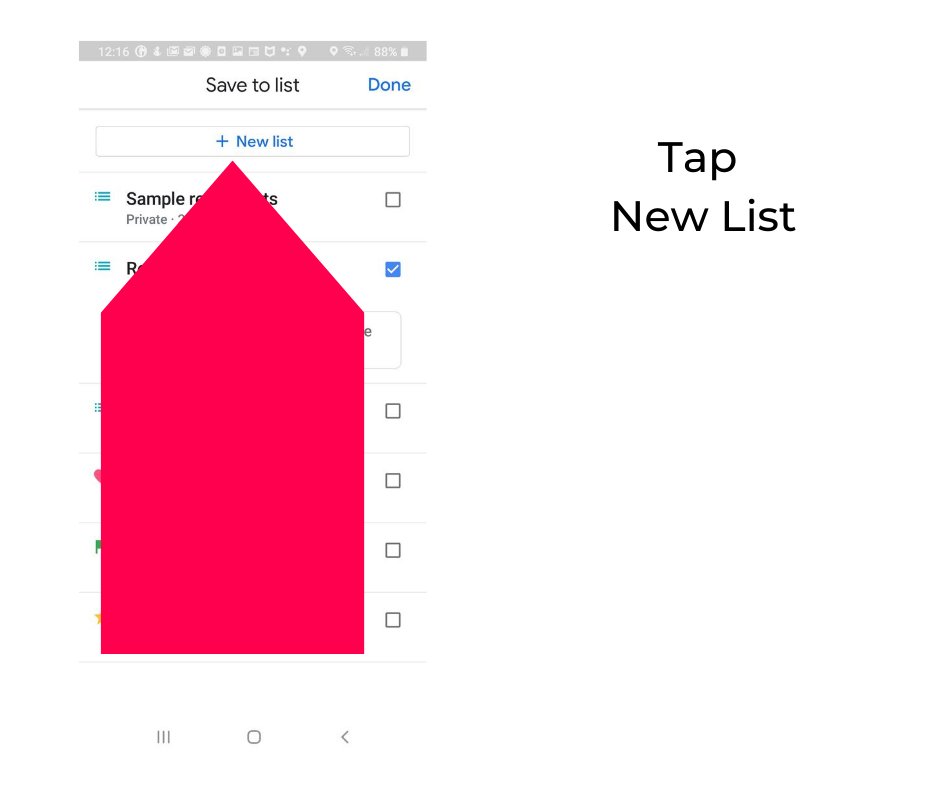 After you tap New List, this screen will appear and you will be prompted to Name your list and give it a description.  You will also have the option to make the list Private, Shared or Public.  Go ahead and name your list and add a description if you wish.  Then tap Save in the upper right corner. 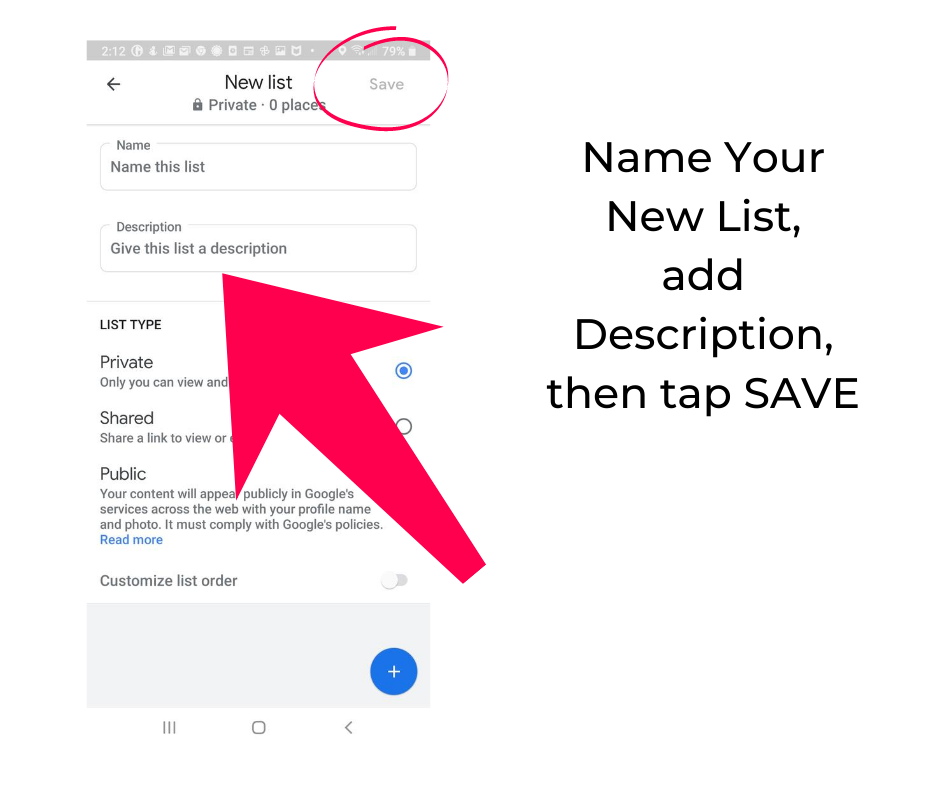 Now it’s time to add items to your list.  You will do this by navigating back to the Google Maps Explore tab so the actual map appears.  Add your search parameter in the search box and the items you’re searching for will populate the map with red pins. 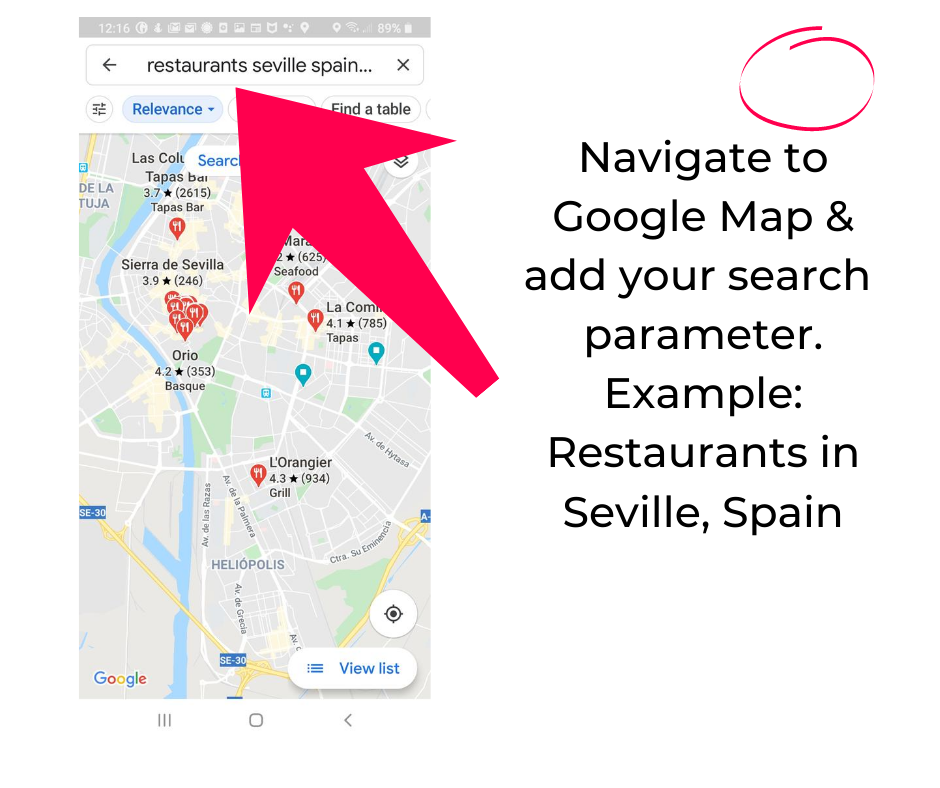 Now that you have populated your map with items from your search, you can add any of them to your Google Maps Saved Places lists.  To add an item to a list, tap the red pin of the item. 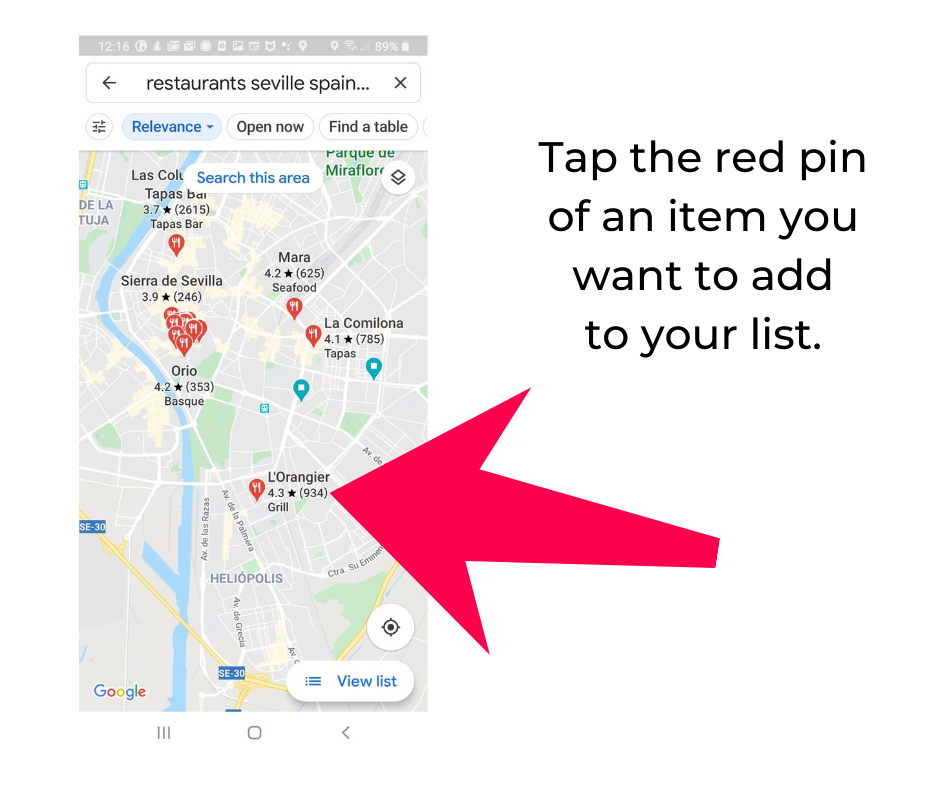 After you tap the red pin of the item that you want to add to your list, an information page for that specific item will open up.  Once that page opens, tap the Saved Places icon to add to any list that you have created. 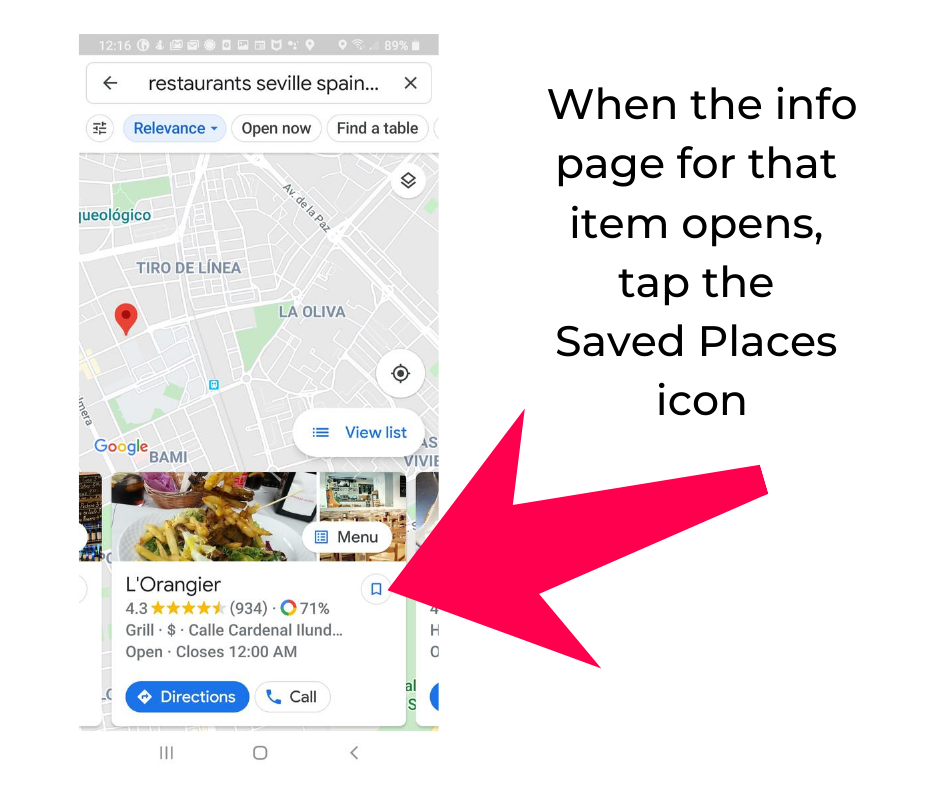 After you tap the Saved Places icon, a screen displaying your lists will appear.  Simply tap the checkbox of the list you wish to add your item to, then tap Done in the upper right side of screen. 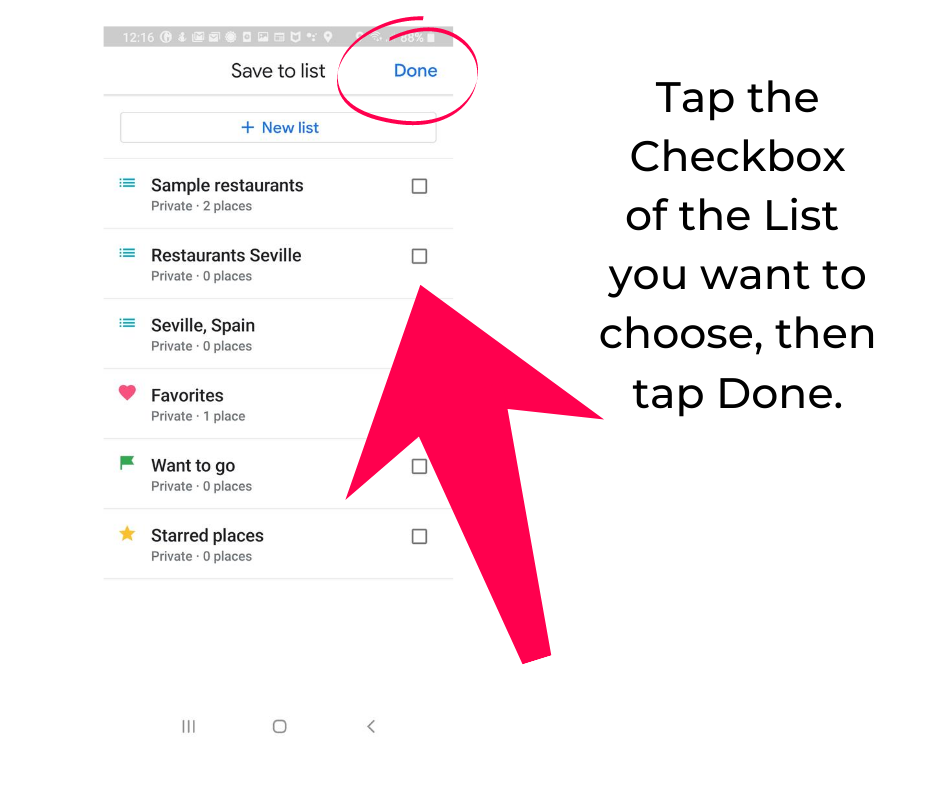 You’ve now added your item to your list, and it will show up in your Google Maps Saved Places lists.

There are many ways to organize your lists if you’re using them while on a trip.  In this example I made separate lists for Restaurants, Sightseeing, Museums and Cafes.  Gotta have those cafes so you know where to stop for coffee! 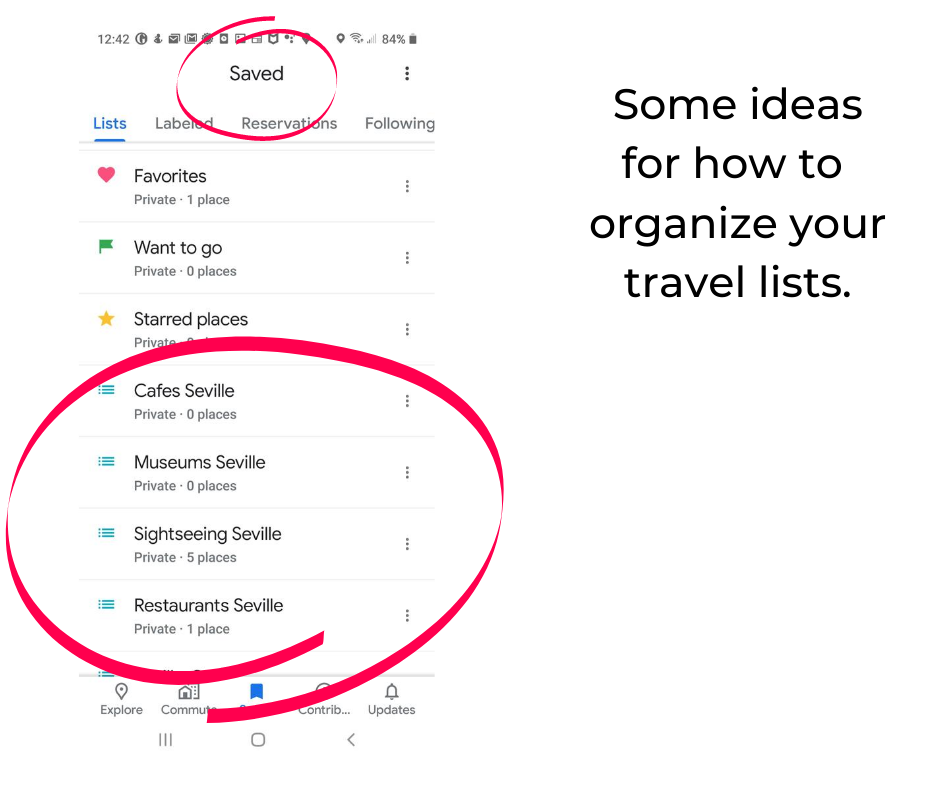 How To Make Google Maps Saved Places Work Best For You

I personally like to keep very specific lists to keep things organized.  And I don’t use the Default lists of Favorites, Want To Go and Starred Places because I prefer to create more specific targeted lists for each trip.

Add notes to each item.  Why?  Because once you get the hang of this you may be adding items often and over time you will end up with tons of things on your list.  You’ll appreciate having a little reminder note of what made you add it to the list in the first place.

As of this writing, there is a max of 500 items per list.  Another reason I like to have targeted lists for different things so I don’t have to worry about running out of space.

You can share your lists which is great if you have traveling companions.

Use your lists as sort of “ideas” folders.  Every time you think of anything related to that list that you think you might be interested in, just add it.  You can always delete it later, but you can’t ever add it if you’ve completely forgotton about it!

Create “Possibilities” and “Done” lists to further organize your information.  For example, create a Seville Restaurant Possibilities list for any restaurants that sound interesting that you might want to consider.  And create a Seville Restaurants Dined In list for the ones that you eventually did dine ine.  This will not only keep you organized during your trip but will give you a record of what you actually did on your trip in case you like to keep a daily account of where you were and what you did on each trip.